1.0: So… the book of Judges tells me that Samson never cut his hair.  how long do you think it got? Do you think such a manly man wouldave kept it well groomed? Or do you think that it would’ve gotten all “Robinson Crusoe” on him?

1.0: Holy smokes!!! what a relevant/witty retort!!! how bold of you to put it into those terms!

2.0: 1.0, just cause I didn’t comment yet doesn’t mean I haven’t thought about how I was going to respond… OK, I never thought about how to respond. But, that’s beside the point. We are talking about Samson here, not me. Samson, oh, he ate locust and honey, the wild man sort…  Oh wait, that was John the Baptist. Well, nonetheless, my deduction: Samson was well groomed.

1.0: Although your plethora of facts about people who ARENT Samson speaks volumes on this subject… lets go over some of the RELEVANT facts… Namely: this whole business of Delilah being “oh-so-willing to to cut off all his hair”.  this tells me a couple things.  things like “Wow, gals mustave been trying to dictate men’s fashion since BIBLE TIMES” and “his hair must have been pretty repulsive”.  I’m thinking “Billy Prince Bonnie” magnitude repulsive hair… with muscles… that were also hairy.

2.0: Touché. However, ropes don’t normally melt off the hands of a disheveled dude. If you’re that hot, you must have some sweet looking hair, naturally stylish of course. Likewise, tearing a part a lion with your bare hands happens only if you are mightily good looking… OR if the Spirit of the Lord “rushes upon” you… OK, so it was probably the Spirit of the Lord, but he still married a 10 (on the looks scale) from the Philistine’s side of the tracks.

1.0: Hey: even a blind squirrel finds a nut every once in a while (Paul Walker is another GREAT example of this rule).  All the philistine gals that I know are prone to marrying a guy not based on his looks, but his ability to shred a lion with his own bare hands.  The 1/2 Yettie-Sampson was lucky enough to benefit from this trait.  We are talking about Samson… the guy who caught a cunning fox.  This means that he had so much hair that the fox mistook him for a buffalo or ox or harmless-hairy-ugly-thing. Oh but was it wrong! and let this be a lesson to ALL of us… we’ll probably get set on fire (like the fox) by a strong hairy dude if we mistake him for a hugly (hairy + ugly).

2.0: Not to derail our conversation on Samson – I’ll come back to this debacle shortly – BUT I wondering if we might skew the thoughts of those reading this with our oh-so-careful-and-clear words… On second thought, however, I think it might make them actually read the story of Samson. Anyways, back to the argument. He killed some fools with a jawbone. Not any jawbone, mind you, he did it with a donkey’s. That’s baller (phrase stolen from Josh Howard, who also is a quote-unquote, baller). I’m not sure about you, but I don’t know of any such people who do not have well-kept hair.

1.0: Hmmmm… you may have a solid point there.  baller status is reserved for those who make at least SOME effort to maintain themselves.  but i’m going to stand by his hugly-ness.  perhaps he was equal parts maintained and mind-blowingly hairy.  Really trustworthy and scientific research has led me to conclude that Samson probably looked like this: 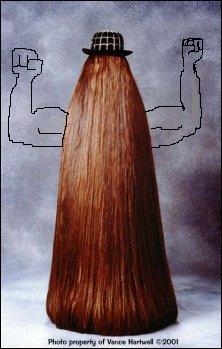 Take note the well combed hair… soak in that silly bowler hat which leaves the impression of “trying a little too hard to groom himself”… come to terms with those spectacularly drawn biceps (probably drawn by a crazy-awesome artist) which would have no trouble taking city doors right off their hinges.  I give you… SAMSON! Judge of Israel!!!

One Response to “Samson: lovely locks or wicked dreads?”